Survival Bars are the common name for foil-packaged, nutrient dense bars made to last for a long time and provide the required caloric food intake in survival situations.

Often, these are what you will find packed in off-the-shelf survival kits.

As a matter of interest, I was keen to compare a couple of options out there, in regards to cost, nutrient profile, and of course, taste…

Personally, my interest more leans towards the bushcraft and self-reliance, the ability to provide for yourself in this world – more a case of ‘thrive, not just survive’ – but it never hurts to have a plan in place.

I do have a BOB ((‘Bug Out Bag‘ – also known as a 72 hour bag – a kit that has the basics in it, should you suddenly need to vacate your home in case of an emergency.)) that has all the basics in it, including some food – but generally, this food a medium-term lifespan, which then needs to be checked and changed out regularly. Could it be more worthwhile swapping out with some long life (often 5 years) bars?

Hardtack dates back to the American Civil War and it is probably safe to say this was an ancestor to modern-day survival bars, essentially it was a flour and oil mixture that was used in military circles to feed soldiers and designed to never go off. Hardtack is basically unleavened bread. Wheat Flour (it’s principle ingredient) contains more than 10% protein, as well as Vitamin B and people can live and have lived for quite a while on only bread and water.  Raw flour can be hard for people to digest, but in the form of hard bread, pilot bread or Hardtack – it is edible.

Remember the Rule of Three;

The first question then becomes – do you even need survival food? Or does it become more of a morale issue? Do you think you could, if pressed, actually make it through a couple of days without food? More than likely. However, most of us are used to not going hungry, and the mere thought of missing a meal can induce fear. The reality is though, most of us can live with a significantly reduced calorie intake – some of us may even have a little ‘inbuilt’ reservoir that we can draw from.

One worthwhile thing to note here though is that the rule of 3 is often based on a low caloric output. That is, you are in a situation where you are generally reducing the amount of work you do, even to the point of being stranded in a life raft. If you were still highly active, and burning off the calories then you would need to find food to keep up your energy levels. In that case, these bars may not be enough.

Many of the survival bars get their name from the ‘recommended’ 1200 calories intake per day or 3600 for a 3 day period. The bars are designed to deliver this amount of nutrition in a long life product. These survival bars have the basic building blocks of flour and oil but with vitamins and minerals added to reach the target RDI. Add some flavouring and vacuum seal it in foil. Mmm-mmm good. Much like Mc-Donalds, if read the back of the packet they sound like they are the perfect food.

I put together a quick comparison of the commonly available options below. Personally, I think that if you are at the point that these things are the sole source of your nutrition, they are all going to be much the same.

Here is a great overview and explanation of terms like RDI, Energy, Kilojoule and so on – understanding the nutritional information panel.

Water – Will I need it to eat these bars?

Most survival bars are advertised as ‘does not require water’. Essentially, this is because of two things – they are both low salt (sodium) and low protein. Salt increases thirst because it alters your blood ‘thickness’. The human body runs within very sticky limits, and if you increase sodium, your body increases your required water intake (thirst) so that it can dilute your blood out until the kidney can process the excess. Protein requires water to break down. Again, because water is used in order to do that, you will get thirsty. However, just because they won’t make you thirsty, doesn’t mean you won’t want some water to make them more palatable, which leads us to…

Tasting – Why it pays NOT to have nice tasting rations

A common complaint online is that these bars aren’t exactly gourmet eating. However, in a survival situation, food is to be rationed. So it actually makes a little sense to not have more-ish tasting bars. However – for a taste comparison – check out the video. 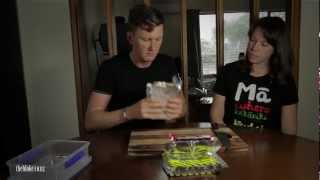 The reality is, if you are getting these bars with a 5-year lifespan just so you can pack them and forget about them, you are being lazy. If you are packing a Survival Bag, you should be regularly going through it and checking its contents, replacing medicines, double checking the contents and generally be maintaining it. Replacing a couple of food bars every year really isn’t that much of an ask.

Or, you could always make them yourself – home made survival bars, or some hardtack.

If you are not fixating on having the term ‘Survival Bar’ on them, another option worth considering is NZ’s One Square Meals. My partner Alice actually ended up ‘surviving’ on these for a couple of days when her gas cooker failed on night one of a 3-day tramp on the Te Araroa Trail. Although it wasn’t exactly survival, Alice essentially ate only the OSM Bars and beef jerky she had. Em’s Power Cookies would be another option to consider. Of course, these bars are going to have a much shorter shelf life.

How about Meal Replacement Bars? Thanks to the fitness industry getting so big and wanting to provide people with the ‘magic formula’ for losing weight by replacing food with laboratory designed nutrition, there is now a plethora of bars and shakes out there designed to replace meals. Go to a muscle/supplement shop and you will be amazed at the options out there. These are all designed to do exactly the same as these survival bars – and will often be even better designed in regards to a high energy expenditure situation. Check the expiry dates on them – but again, most will last a long time.

None of these bars would really be my first choice as food. I can see the point of having them in a go-bag or something where you needed small, and generally unplanned emergency. But the reality is, I won’t be stashing them at home or in the ’emergency food’ packs. Hell – I would go so far as saying that if you found yourself having to rely on these for any major amount of time, your planning has failed, and you are likely to be facing bigger issues.

At home, we have piles of canned food, foil packaged dehydrated food (Ova-Easy Eggs for example) – and a pile of other stuff that will not only fill us up, both in regards to nutrition and also having something the resembles food in our stomachs. My Bug-Out-Bag has some One Square meals in it, some instant oats, and a tea bag. It’s mainly a morale thing.

If I am out hiking or tramping, part of the experience, to me, is cooking a meal – the process and time spent doing it, and the warmth and sense of ‘good’ that it provides – chewing on a bar just wouldn’t do it for me, no matter the weight savings.

ROAD iD – emergency id for yourself, your loved ones.

Piece of mind means doing all you can to ensure, should the need arise, your kids will be safe, even when lost or separated from you. ROAD iD is a smart method of managing ICE (in case of emergency) details for yourself and your family.

Yet again, I had a client in that had been sold the wrong setup.

I have had the VRTBR C7 Pants and Parka for several months now, and much like the Thermal Fleece Layer, every time I put them on, I revel in just how awesome they are. Since the day I first unwrapped the package, waxed paper, wax seal and all, I have marvelled at just how nice hunting clothing can actually be.

Radix Nutrition is an exciting new freeze dried food company that already has turned some heads with their range of nutritious performance meals. Their concept of freeze-dried nutrition with 100% natural ingredients (organic where possible) is as simple as the “just add water” instructions.

All our interviews from the Sika Show 2018 in one place.