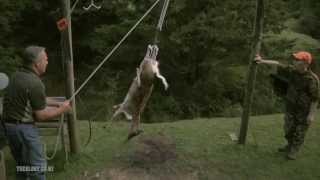 As part of the Hunts course I am currently attending, we went up to Balnagown Deer Hunts – they have 300 acres just north of Auckland, which is set up for Deer hunting and outdoor adventures. We were there to learn about processing deer – a somewhat important skill should you be out in the bush and actually manage to shoot one.

The owner, Richard, provided the animal, and the first lesson for the day was skinning and gutting the animal. The first stage of processing deer.

The key to looking after the meat from a fresh kill is getting it cool as quickly as possible, while protecting it from the flies. The speed at which Richard had the skin removed and tidied up the carcass was incredible – it’s obvious the guy has a lot of experience with deer.

After the Deer was skinned, gutted and hung, we headed off for a bit of a stalk around the property.

Richards land is a mix of open paddock and dense bush – so there is opportunity see deer out in the open, as well as getting the opportunity to practice your stalking in the bush. While we certainly heard them in the bush – seeing them was a bit different – though, as is often the case – you often had the feeling something was watching you.

Returning to the hut, we began to process the animal – it was really interesting to see how all the muscle groups can be easily identified, and learning all the different cuts was certainly an education. Processing deer is certainly something that improves with practice.

I hope to head back up to Balnagown soon. Richard has a great set-up up there, as well as a wealth of knowledge, and a really good story to share.

Previous articleSportster Tank Lift, Cable Tuck
Next articleBore Brushes – Bronze or Nylon
Kerry Adamshttps://thebloke.co.nz
A constant learner with an inquisitive mind, Kerry created The Bloke as a way to share what he was learning from the community of experts he found himself surrounded by. Precision Shooter and GunSafe soon followed. Somewhere along the line, he picked up one or two things himself. But don't call him an expert.

I recently spent the weekend up in the Coromandel - actually, amazingly, renting out the same bach that I spent many, many weekends at...
Kids Activities

Junior Rangers – getting the kids out of the house.

Lockdown again. Only level 3 for the moment, but it suddenly dawns on you that you and the kids haven't actually left the house...
Good Blokes

The Trigonometry Show – Nic from the Sparrowhawk Shooting Facility