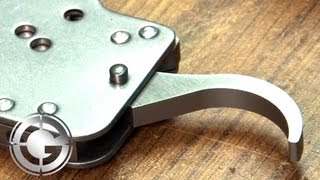 The importance of a trigger in a precision firearms system cannot be understated.

The trigger, it’s function, and the shooters interaction with it has a direct, and significant effect on where the firearm and hence barrel ends up pointing when the shot breaks1 and therefore where the projectile ends up downrange.

It’s also a bit of personal preference – they way people set up their triggers can be based on experience, taste and purpose – and it’s often a bit of a mix of all three. Is there such thing as the perfect trigger setup? Maybe. But first – what is the trigger, and how does it work?

For this article – we are focusing on the precision rifle realm – specifically that of the bolt action rifle – so don’t expect much talk about the reset and so on,  – that is more the domain of the semi-automatic. Lever action rifles and hammers are different again. We are also not so much talking about the inherent safety requirements of a trigger – consider that assumed.

In our usage – generally – a trigger is a series of levers that pins back (and then releases) a spring-loaded striker pin. When we run the bolt, we ‘cock’ the striker pin and when we pull/squeeze/press/move the trigger. The levers move the sear2 which allows the striker to move forward, the firing pin hits the primer, and BANG! Fun times.

Sure – it’s more complex than that, and I imagine some gunsmiths out there will take pride in correcting me.  But for most of us – that’s how it works. That’s all we need to know (you don’t need to know how to build a trigger to use one).

The cleaner breaking trigger – that is – one that simply, and almost imperceptibly releases as you apply pressure to it, will generally mean less disturbance to where the rifle is aiming. That is the ultimate goal, after all – to disturb the firearm as little as possible in the process of firing it.

What makes a trigger ‘clean’?

There are a lot of aspects that come together to make a trigger ‘good’ – again, some of these become personal preference – but let’s cover some of them off here…

Creep is the movement that you might feel on a trigger when you place your finger on it and almost have to ‘take up the slack’ before you reach the point where the trigger will break. Other ways would be to describe the trigger as sloppy or lose. Though, with any modern rifle – none of this should be of concern. If it is, then I don’t know if you have the right setup for precision rifle shooting. Just saying.

This is how ‘clean’ the trigger feels with use. It should be repeatable – without any rough, odd, ‘gritty’ spots as you press it. With field shooting, stuff can get into triggers, and they do occasionally require a clean – but generally, you shouldn’t ‘notice’ anything in your trigger.

The opposite end of creep – this is the amount the trigger may continue to move after the sear has disengaged and the shot has broken. There is the potential this is happening while the rifle is still firing (see locktime, below) and means more movement from where you say the target in your reticle, and where the projectile left the barrel on the way to it.

Things aren’t instant. They are quick – potentially even too quick for our conscious mind to perceive – but not quick for it not to affect the direction of the rifle when we pull the trigger. The mechanical time it takes from when the sear disengages to when the striker moves to hit the primer, is known as locktime. From there, another delay occurs while the primer ignites the powder, the bullet leaves the neck of the cartridge, moves down the barrel and exits.

This is why, when we fire a precision rifle system – we need to be aware of our follow through – ensuring that we don’t unsettle the firearm in those minute moments where we can still affect the process.

The many flavours of triggers

The point of this article was simply to establish some common terminology and define what we want out of a trigger. Once this is established, we can talk about our preferences when it comes to trigger weight and the age old discussion about single stage vs. two stage triggers.

Previous articleRyan Hey
Next articleA Single Stage Trigger Vs Two Stage Trigger
Kerry Adamshttps://thebloke.co.nz
A constant learner with an inquisitive mind, Kerry created The Bloke as a way to share what he was learning from the community of experts he found himself surrounded by. Precision Shooter and GunSafe soon followed. Somewhere along the line, he picked up one or two things himself. But don't call him an expert.