I get cold. Which is odd, because I sleep hot – but I do find myself often reaching for a jumper or jacket, and the Macpac Supernova has always been close at hand for a few years now.

I find it hard to beat down for the ultimate weight to warmth ratio – it traps the heat being generated by the body quickly, and create a snug environment. Whenever I head out into the bush, the Supernova is packed in a dry bag, right next to the sleeping bag – in fact, its become a standard part of my sleeping kit – I can get away with a lighter sleeping bag, in the understanding that I will just wear the jacket at night as well. Tested several times, works well.

However, the Supernova is also a little delicate, and, well, bright orange – so as the season got colder this year – I got myself one of the new Hunters Element Razor Elite Jackets. Now – most people likely already know the Stoney Creek equivalent – but – there we a few design and functional elements of the HE version that caught my attention.

We had the new range heading into work, so I had the opportunity to check things out in the flesh – and first impressions were good. The design caught the eye – and I decided on the green/grey version.

Initial thoughts – it fitted well (I wear the large), the cuffs (a smart double system) worked well, and there were heads of pockets. I initially thought the hood was a little ‘small’ – but it grew on me.

One thing, which is, I believe more a function of material choice over design – is that this jacket is, undoubtedly warm, too much soo sometimes, but it doesn’t get stuffy and clammy like many soft shell designs too. I can only hypothesize, that the material is letting the water vapour from sweat get out a lot quicker than some of the more waterproof materials might – I have several other jackets that quickly clam up – you feel the sweat trapped against you, while the Razor just gets to the point where it is too warm to wear anymore, but not where you immediately feel like you need to turn it inside out to dry out.

I have been pretty much living in this first thing in the mornings – many would know this routine – get up, put something on – turn on the kettle – head off for a piss. I have found the Razor is the first thing I generally reach for – and the material is quite comfortable over bare skin – not overly plastically or sticky feeling, apart, from the care label in the upper centre of the back. 😉

However, and this can’t really be a criticism, it’s just doing its job – I do find by mid-morning, this jacket is already too warm for wearing around in the Auckland climate. However, this would also lead me to think it’s going to be phenomenal further down south – and look forward to a few more roaming adventures in it.

Initially, I thought the hood was a bit shallow – but then realised it was more a matter of mindset. While this jacket is water ‘resistant’ – and the down is hydrophobically treated – it’s not a raincoat – and as such – the hood doesn’t need to come as far forward as those jackets do – in fact, but keeping it a bit shorter – it remains tucked up under your waterproof layer hood, should the need arise – however- it’s also a rather thick jacket – so if you are planning on incorporating this as an insulation layer – it might pay to check you aren’t just going to compress (and therefore reduce the effectiveness) of the insulation under a rain jacket.

Zip it all the way up though – and the hood on the Razor traps the heat around the neck and noggin – and does a brilliant job of keeping this warm. If you added a buff to keep the lower face and nose warm – you basically have yourself a coffin style sleeping bag on your upper body!

The double cuff works as advertised – keeping in the heat and also keeping the jacket from riding up the arms – unless you want to push the sleeves out of the way, then it keeps them there nicely as well. This cuff ends are starting to show a little pilling now – but then I also have a watch constantly brushing up against it, so I would expect that anyhow.

Pockets. All of the pockets.

I tend to carry a lot of stuff around with me – so the extra pockets on the jacket are a welcome feature – in the front ‘hand warmer’ pockets – well – I warm my hands, but also carry wallet and phone – while the inside pockets have space for the beanie, gloves, buff and a length of paracord. Check pockets hold a small first aid kit, notebook and a few other bits and pieces – loaded up – the jacket happily carries the weight – without any weird sagging of the hang.

Is all top-notch. I have been wearing this near constantly for a couple of months now – and my only observation would be that a bit of the down ‘fluff’ seems to try and work it’s way out through some of the stitching on the front of the jacket – this is probably highlighted by the white down against the dark material – and I have found it common over several down jackets I have worn over the years. No major, just an observation.

I have worn it in a couple of showers, and, lo-and-behold – the down didn’t just instantly collapse into a sodden mess, and the material just seems a little more robust than the admittedly more lightweight Supernova skin.

The folk at Hunters Element are on a bit of a mission – one of sustainability, traceability, and ultimately, just being nice to the planet we live on. Like many things, a little bit of knowledge is a powerful thing – so as I heard more about some of the questionable live-plucking methods of the down collection – this video really caught my eye.

While I am sure plenty of companies are starting to do their bit as well – Hunters Element have proudly presented the ethical production of their garments as a core part of their company ethos – and, for ethical hunters – this is something we need to get behind and support. Without going into it too much – hunters really can be the bastions for sustainability and ultimately, conservation – in fact, more ‘branding’ that way would help several causes a lot. 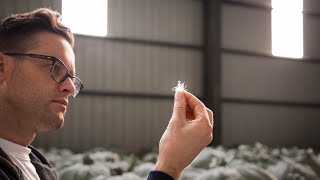 So – in use, down or synthetic and the pinch…

As already mentioned – I have worn this jacket a lot – however, as of late, I also haven’t been headed bush much – though, the cold in urban and the cold in the wilderness is still cold. I have stood on a few ridgelines, and the wind doesn’t cut through, walked through a few showers and the jacket has dried out, it’s basically become my favourite, general purpose jacket.

For lightweight hunting though – I will likely stick to the Supernova – it’s lighter, packs smaller, and for the amount of insulation I need – more than enough. I can see the Razor coming with me on all the truck-based trips in the future though.

In regards to the down vs. synthetic debate – I did also look at the Switchback Jacket – which is more a technical jacket aimed at the lightweight hunter (I feel) – it reminds me in principle, of the First Lite Sawtooth – insulation just where you need it. But – for what I was after, I knew the Razor would just get more use.

So – the jacket is awesome. Urban, Maimai, cold tops – it’s going to provide the ultimate warmth in an ethically sourced, well-designed form. Get one.

Previous articleThe Bushnell Forge 15×56 – all the magnification you need?
Next articleSpoilt for choice – the Leatherman Signal vs Leatherman MUT
Kerry Adamshttps://thebloke.co.nz
A constant learner with an inquisitive mind, Kerry created The Bloke as a way to share what he was learning from the community of experts he found himself surrounded by. Precision Shooter and GunSafe soon followed. Somewhere along the line, he picked up one or two things himself. But don't call him an expert.