Like many folks in the shooting community – I like new toys. Some new gizmo comes out, and I will be first in the line, reading about it, pondering over it, lusting after it. Well, to a point.

I am learning, that it is all very well having a gizmo that does something new and cool, but if it doesn’t actually fit into your workflow, as in, it’s actually usable in your shooting – it makes little sense to force yourself to use it, just in order to use a new feature. More than likely, as the initial excitement wears off, you find yourself not using half of what the marketing department sold you on.

Now, to be clear – this is a very personal and individual situation.

People use equipment differently, shoot differently and have different needs and expectations out of their equipment. So – to be clear on my situation – I primarily field shoot – hasty positions, multiple targets of both known and unknown distance, a need to quickly devise a shooting solution and execute the shot. I am not generally sitting in one place for long periods of time, waiting for favourable conditions (like many Benchrest and F Class shooter might, for example).

I have learnt the hard way, and will likely do so again in the future, that often, new features don’t actually fit into the way I like to instinctively do things. It may sound like a cool feature, but in use, it simply doesn’t help what I am trying to achieve. That is quick and accurate shots on target.

What is this article about?

Basically, how I am looking to integrate the Sig Kilo2400 into my shooting. It’s kinda a review, but more so, it’s a pondering and musing on how gear gets integrated into your system. I am trying really hard not to use the term ‘philosophy of use’ (some of you may understand why) – but there you go.

A little history in regards to my existing setup.

Specifically, in regards to ballistic calculators – because I guess that is the ‘special sauce’ of the new Sig Kilo 2400. It has Applied Ballistics built in.

I started, like many others, using charts found online. Quickly, I progressed to a phone-based app – initially using Ballistic AE, but also playing around with Shooter and a couple of others.

Quickly though, I got to the point where I no longer liked using my phone as a ballistic solver. Battery issues, signal issues (for weather updates) – wanting to use the phone for photos and, well, as a phone (social media updates) and, basically, battery issues.

This simple ability to, if I actually do somehow run out of battery – just replace it with another AA (which I, shock horror, can carry multiple spares of) – and carry on running? Priceless.

In addition, I wanted a wind meter. I had considered getting an entry level Kestrel or the like, and adding the data from there into an app – but quickly fell for the notion of a particular workflow the Kestrel offered.

The Kestrel Elite 5700 is the top of the line Kestrel, with Bluetooth and Applied Ballistics build in. I got it with the Weather Vane Setup as a particular workflow appealed to me –

Nothing like live wind updates to ensure I had the most up to date information at hand for my shooting!

Of course. I quickly realised that the theory, for me at least, was going to work out better than the reality.

The reality was, apart from the extra time it was going to take to set up the tripod and weather vane (some shoots require all equipment to be up off the ground before start) – and the fact the Bluetooth didn’t always connect, that having live, constantly updating wind solutions, really just distracted me from the fundamentals of shooting. The reality is – with wind – you have to take a low, high and average, understand the solution, then get behind the scope, be aware of the environment in those moments before breaking the shot, and make a decision.

Having a constantly changing data input just kept dragging me out of the scope (both literally and figuratively) and I found myself monkeying1 the phone, instead of focusing on the shooting at hand.

To me, the end goal for technology integration, should be that at some point, the technology ‘disapears’ and you are able to simpy get on with the task at hand. The technology shouldn’t demand or require massive amounts of attention – which will ultimatly distract you from the task you should be focusing on.

If you haven’t already watched it – Todd Hodnett’s new DVD ‘Long Range Shooting Made Easy’ covers this point very well. Get wind readings, understand their effect, apply to your shooting.

However, on the flip side, though not using the weather vane, having the wind meter and solution in the one piece of hardware has made the workflow, very, very quick when it comes to entering in target data, direction, wind speed (metered) and direction and finding my ‘brackets’ for a solution.

To cover off my basic workflow with the Kestrel now –

If it’s multiple targets, then I write up a simple list, ranging them all first (this is often done as part of the stage brief) then turning those ranges into a solution.

This can all generally be done within a minute or two.

So, basically, I needed a rangefinder. I generally was borrowing one, either for the shoot or from another competitor. Neither option really ideal – because it wasn’t always known equipment and changing someone’s gear from yards to meters and back again each time was a bit of a pain.

Now, I would have loved to have purchased a Vectronix PLRF25C. Or something of that ilk – but, realistically, I am not shooting ELR at the moment – so only need to range to around a max of 1.5k, and didn’t really have 10k plus to spend (a new rifle is happening prior to that when I do!).

However, I had recently purchased Applied Ballistics ‘Modern Advancements in Longrange Shooting Vol.2’ which included one of the most comprehensive rangefinder reviews that have ever been done. Short version (and just go buy it yourself) – if you focus simply on the performance of the rangefinder – i.e. it’s ability to accurately return a range to target unless you want to go for the Vectronix end of things, the Sig Kilo 2400 is your best option. 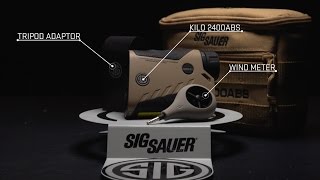 However, my sticking point was this (something mentioned in more than one review of the unit) – I had already paid for Applied Ballistics once (in the Kestrel) – and I liked the existing workflow (more later on why I don’t like the idea of an in-optic display), but wanted to best rangefinder I could get for the money (before going to the high, high end of things).

Eventually, though, I concluded that my primary use, was a rangefinder, so I wanted the best unit when it came to ranging and reporting that range. I bit the bullet (so to speak) and purchased the Sig Kilo 2400.

Now, this is really just my ‘initial thoughts’ – as I have only used it once. However, I think about the usage a long time before any purchase, so already have several ideas in my head, and, a day with it cemented a couple of others.

First Impressions – in the box

Quite a lot has actually been said about the kit that comes with the Sig Kilo 2400 – it comes in a nice Molle Pouch (that I will likely never use, but might repurpose for an ammo box carrier), a smaller hip belt pouch (that, sadly, doesn’t come with a Molle Strap, so again, I am unlikely to ever use) a tripod mount (again, not likely to use) a Pen (which I am going to do a seperate comparison review to my new Hardcore Hardware Pen), a wind meter for the phone (will try it, unlikely to use it), so in short, a lot of stuff I won’t actually use in my workflow, with my setup. Ah well.

The unit is built well, feels good in the hand, easy to set up, easy to just turn on and take a range with. I ended up using the supplied device pouch on a velcro tab on the belt – however, I have also realised that the Armageddon Gear Mag pouch will fit it perfectly. So will likely swap over to using one of those on the MOLLE belt rig I am playing with at the moment. 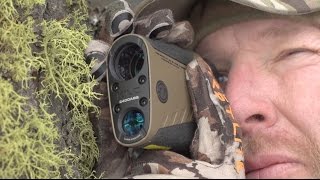 After quickly playing with the unit that night, in the end, I simply left the unit at the ‘default’ Angle Compensated Range setting, changed from yards to meters and used it all the next day to range targets.

While the distances were actually given (and accurate) at the competition – there was certainly a difference in angle compensated and LOS distances. I simply entered the ACR into the Kestrel and went from there. I have since done some calculations as to the best method (ACR or LOS and Angle) and will write up a separate article – but for what I was up too – it worked out close enough. Certainly, the ‘margin of error’ wasn’t the reason I missed the shots I did.

In short, the unit performed exactly like it needed to – I had no issue ranging any target on the day and I was confident that the data that it was reporting back to me was accurate.

So far so good. As a rangefinder, I knew the Sig Kilo 2400 was going to do the job – what will be interesting in the next couple of months – is if I find myself changing over the the ‘Sig’ workflow of doing everything in the unit and phone. We shall see…

Previous articleGraeme from Taranaki Long Range Shooters
Next articleKriss DMK22 – 22 AR Platform Rifle
Kerry Adamshttps://thebloke.co.nz
A constant learner with an inquisitive mind, Kerry created The Bloke as a way to share what he was learning from the community of experts he found himself surrounded by. Precision Shooter and GunSafe soon followed. Somewhere along the line, he picked up one or two things himself. But don't call him an expert.

Heavy and slow or light and fast? The projectile (and ammo) conundrum: Part one – Stability.

What first got me seriously pondering this question was a setup session recently, with a couple of similar rifle that had the same issue....
Ballistics

Ballistics ARC is a ballistic solver - you put in your firearm information, and it outputs the amount you need to dial your scope...
Ballistics

Hello from here in metric land. Weaponised Math (with an s, not z).

https://www.youtube.com/watch?v=BjnSVOu_yXk By now, you have likely heard of weaponized math. Marc Taylor wrote this article outlining a system he formalised that gives a simple way...